The Wassenaar Arrangement, a multilateral export control regime, defines "intrusion software" as software specially designed or modified to avoid detection by monitoring tools, or to defeat protective countermeasures, of a computer or network capable device. Intrusion software is used to: extract data or information, or to modify system or user data; or to modify the standard execution path of a program or process in order to allow the execution of externally provided instructions. 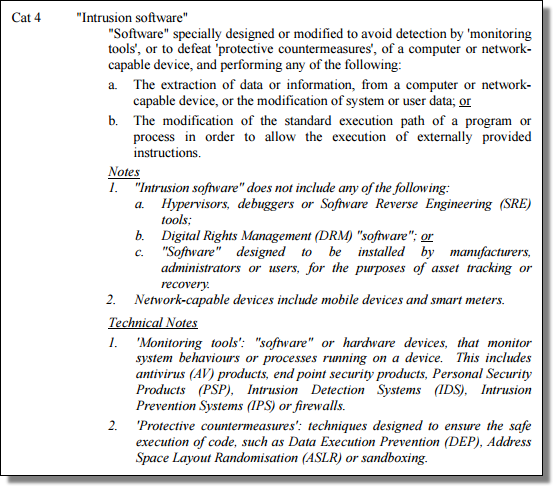 
So… what we at F-Secure (and the rest of the antivirus industry) call "malware" appears to easily fit Wassenaar's definition of intrusion software.

Why is this interesting?

Well, the US Bureau of Industry and Security (BIS), part of the US Department of Commerce, has proposed updating its rules to require a license for the export of intrusion software.

And according to the Dept of Commerce, "an export" is –any– item that is sent from the United States to a foreign destination. "Items" include among other things, software and technology.

So… if malware is intrusion software, and any item is an export, how exactly are US-based customers supposed to submit a malware sample to their European antivirus vendor? Seriously, customers send us zero-day using malware all the time. Not to mention the samples that we routinely exchange with other trusted AV vendors from around the globe.

The text associated with the BIS proposal says the scope includes penetration testing products that use intrusion software in what looks like an attempt to limit "hacking" tools, but there is nothing about what is excluded from the scope. So the BIS might not intend to limit customers from uploading malware samples to their AV vendor, but that could be the effect if this new rule is adopted and arbitrarily enforced. Or else it could just force people to operate in a legal limbo. Is that what we want?